Posts from the ‘Phytotelmata’ Category

Two years ago, Beth Turner did a MSc thesis in the lab and performed a field experiment in Nicaragua together with PhD student Mathil Vandromme. The goal was to demonstrate that prey species do not just respond to predators that are present in a certain habitat, but also to predators elsewhere in the landscape. To test this we used landscapes of bromeliads that have a central tank that provides aquatic habitat.  As a predator we used a caged predatory larva of the mosquito Toxorynchites, a ferocious predator of mosquito larvae including members of its own species.

We could confirm that effects of predators in a natural ecosystem can extend beyond the patch in which the predator is present and that the presence or absence of remote predator effects on habitat selection depends on the distance to predators. The notion that perceived habitat quality can depend on conditions in neighbouring patches forces habitat selection studies to adopt a landscape perspective and account for the effects of both present and remote predators when explaining community assembly in metacommunities.

The work has been published in Journal of Animal Ecology

Bromeliads as habitats for cacao pollinators

In a new paper, we report the presence of cacao pollinators in bromeliad plants and identify factors that influence their abundances.

Bromeliads are common plants in the Neotropics. Being epiphytic, they are often incorrectly considered as parasites and removed from agroforestry systems. However, their water-filled leaf axils provide habitats for a diverse group of aquatic organisms, potentially including cacao pollinating dipterans which could be beneficial to local farmers. Thus far, it is unclear how frequently and abundantly potential pollinators occur in bromeliads in cacao plantations. Therefore, we investigated the aquatic fauna in different types of bromeliads in Nicaraguan cacao agroforestry systems. Our main goal was to study the impact of bromeliad morphology and vertical position on aquatic biodiversity with particular attention for larvae of presumed cacao pollinators. Aquatic biodiversity was higher in larger bromeliads and in bromeliads positioned closer to the ground. Particularly invertebrates without flying life stages were deficient in elevated bromeliads suggesting dispersal limitation. Potential cacao pollinators occurred in 66% of the bromeliads and were most abundant in bromeliads with larger tanks that were located higher in the canopy rather than on the plantation floor. We conclude that larvae of cacao pollinators can be common and relatively abundant inhabitants of tank bromeliads in cacao trees, and it is likely that preserving these habitats could boost local pollinator abundances.

The paper is out now in Hydrobiologia

As from October, Mathil Vandromme will join the research group after having succefully obtained a VLADOC PhD grant awarded by the Flemish Interuniversity Council for Developmental Aid. Mathil will start to work on the potential ecosystem services provided by bromeliad plants that grow in plantations of coffee and cocoa in Nicaragua. After completing her BSc at VUB, she enrolled in the Erasmus Mundus MSc programme in tropical ecology (TROPIMUNDO). During her MSc degree she worked on an elevational gradient in the Monteverde Cloud Forest in Costa Rica. 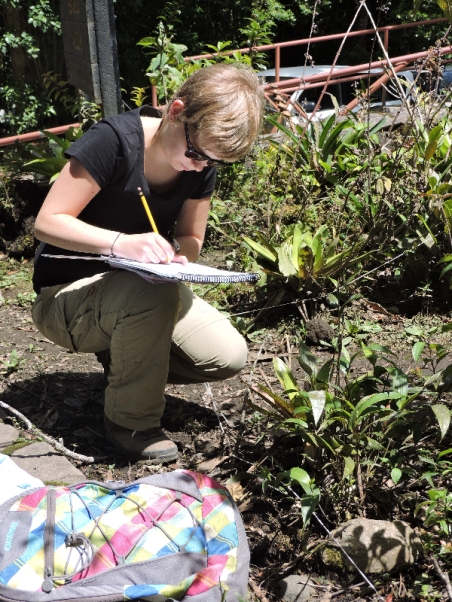