Posts from the ‘Metacommunity ecology’ Category

Meeting with the STURN working group

Bram recently met up with an international selection of ecologists in Leipzig to develop new ways to study metacommunity dynamics and gave a lecture at the German Centre for Integrative Biodiversity Research (iDiv) https://www.idiv.de/

Meeting of the Bromeliad Working group

In September, Mathil and I attended the meeting of the Bromeliad Working Group (BWG) in Paraty, Brazil. It was a great week with a lot of interesting talks, discussions and emerging collaborations.

This means we plan to do more work on bromeliads in the near future in Mathil’s and – hopefully – also Daniel’s PhDs and in collaboration with partners overseas.This will include work on spatial community dynamics as well as more applied work looking at ecosystem services provided by bromeliads. Within these research lines there will be opportunities to do MSc thesises. We will also try to get more funding for bilateral mobility between Brussels and partner institutions in Latin America such as Brazil.

We will add our community data from Bolivia and Costa Rica to the large database that is currently assembled by the BWG to support meta analyses across the continent. More info on the working group can be found on:

Infinite thanks to Gustavo Romero, Vinicius Farjalla and Diane Srivastava for organizing a great symposium and for bringing all these people together! 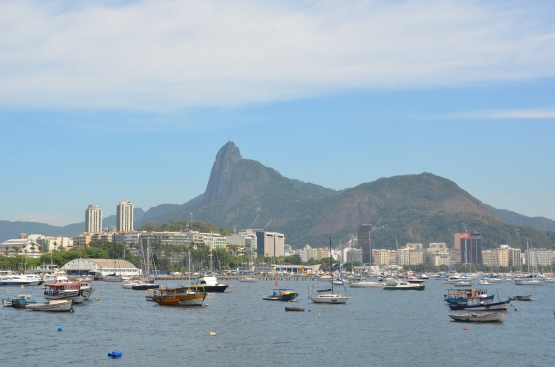 Enjoying the views in Rio 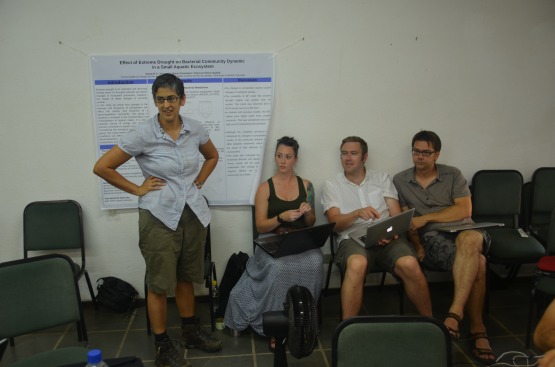 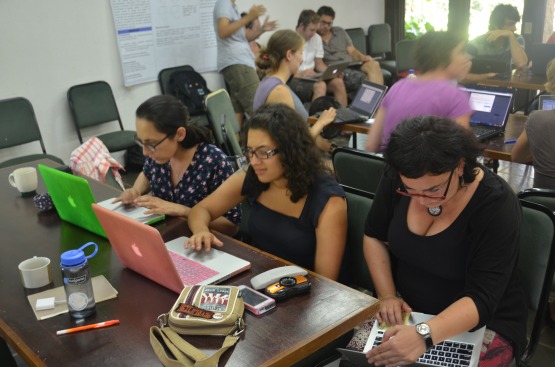 Entering data into the database 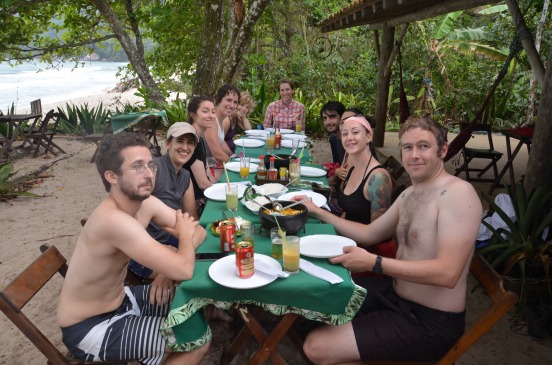 Washing up on the beach after the meeting 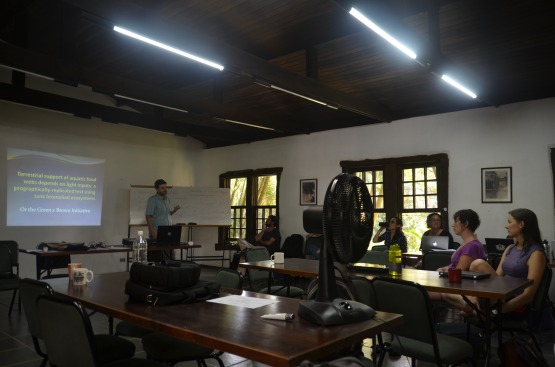 Wrapping up results with Vinicius 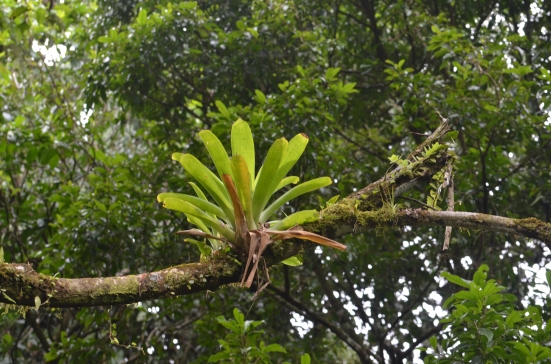 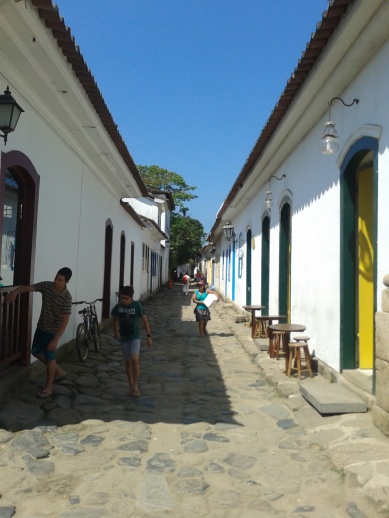 The streets of Paraty 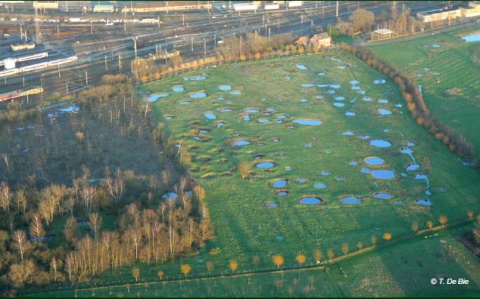 This summer, Hendrik is running a large scale mesocosm experiment to study habitat selection in aquatic insects. He put his cattle tanks in a unique location: a nature reserve that houses more than 100 bomb craters. These craters result from an attempt of the Americans to bomb the railwaylines in Hasselt during World War II. Now it is a remarkably diverse set of aquatic habitats.

Specifically for the experiment it is convenient that the system houses a substantial diversity of aquatic insects and that many pools are subject to drying which stimulates dispersal. 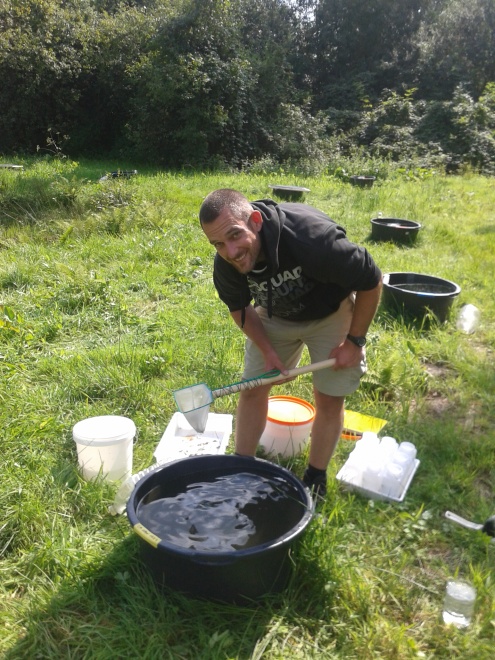 As from October, Mathil Vandromme will join the research group after having succefully obtained a VLADOC PhD grant awarded by the Flemish Interuniversity Council for Developmental Aid. Mathil will start to work on the potential ecosystem services provided by bromeliad plants that grow in plantations of coffee and cocoa in Nicaragua. After completing her BSc at VUB, she enrolled in the Erasmus Mundus MSc programme in tropical ecology (TROPIMUNDO). During her MSc degree she worked on an elevational gradient in the Monteverde Cloud Forest in Costa Rica.

After just three years, Falko Buschke‘s Erasmus Mundus PhD fellowship came to an end. Just months later he succesfully defended his PhD thesis. Initially drawn to Belgium with the prospect of doing a thesis on community dynamics with a lot of empirical work, Falko soon settled into a different niche. Making use of the IUCN database he set out to explain the distribution patterns of terrestrial vertebrates in Africa. For this he used a very diverse set of statistical tools. He reconstructed biogeographical patterns in Africa based on how species present in different locations respond to spatial and environmental gradients. He experimented with novel ways to define regional species pools and investigated the drivers of patterns of alpha and beta diversity. Finally, he also experimented with spreading dye models and built a neutral metacommunity model to explain different biogeographical patterns in this  realm. Overall, it was an exciting journey exploring the interface between community ecology and macro ecology.  Falko, it was great having you here.  We will miss your wit and humour now you have returned to South Africa… and will continue to follow your adventures on  http://solitaryecology.com/ 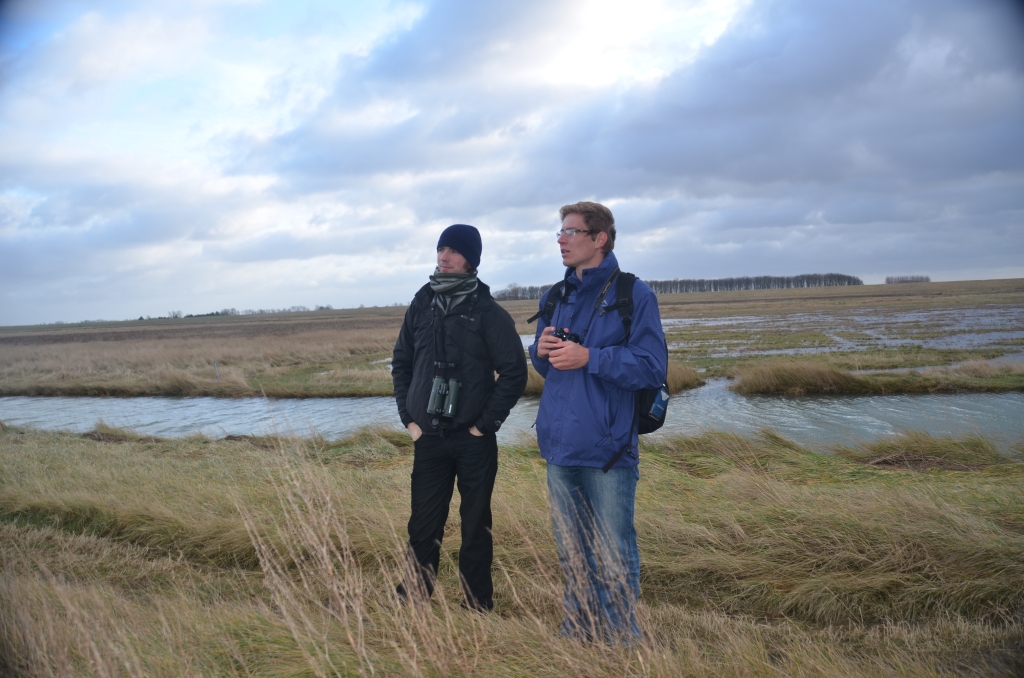 Just two weeks later, Tom Pinceel joined Falko in the league of doctors. After doing a MSc working on genetic patterns in rock pool fairy shrimp, Tom continued along this path and started to explore the hatching strategies of these enigmatic inhabitants of temporary pools worldwide. Tom showed adaptive variation in hatching strategies of pool invertebrates along a gradient of habitat stability. He also revealed that the ancient diversification of fairy shrimp on the Australian continent coincided with a period of intense aridification. When Australia lost most of its rainforests, desert adapted fauna like fairy shrimps seem to have benefited and responded with a spectacular adaptive radiation. This resulted in a nice little booklet with most of his chapters already published. Tom is now continuing his research into delayed hatching as a survival strategy in extreme environments as a prospective post doc. We can only hope he will be able to continue his work in the near future. 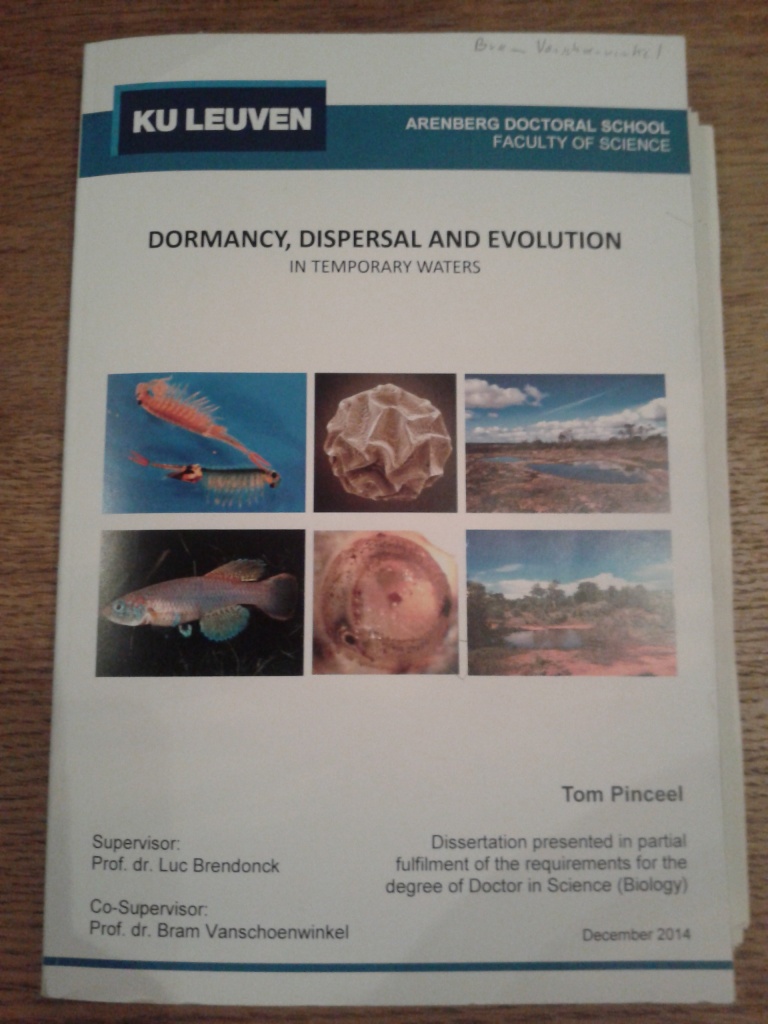 NEW PAPER: Exploring the link between ecology and biogeography in African vertebrates

In a new paper out in the journal Ecography, Falko Buschke tried to explain the distribution patterns of all terrestrial vertebrates that occur in sub Sahara Africa using environmental variables and spatial dispersal related variables.

He found that when you map Africa based on how much variation is explained by dispersal based processes vs. environmental niche based filtering, you can see the contours of the biogeographic regions. This suggests that community structuring processes differ among regions within biogeographic realms.

He also showed that corrections for range size are necessary to extract ecologically meaningful patterns from variation partitioning results.

Finally, he found that unexplained variation was highest in species with small distributions… which is worrying from a conservation perspective as these are often threatened. While we can quite accurately predict distributions of widespread animals, we don’t know very well why certain rarer species are range restricted. 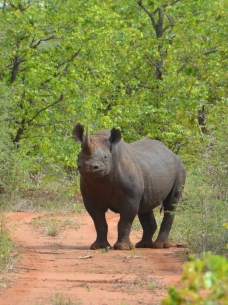 An African Black Rhino. One of the species in Falko’s database.

NEW PAPER: Simulating the effects of climate change on habitat suitability and connectivity in a pond metacommunity

In a new paper published in Freshwater Biology, PhD student Karen Tuytens builds further on a hydrological model for temporary pools I developed in my PhD. Temporary pools are expected to be strongly impacted by the effects of global environmental change. Being directly dependent on precipitation (and occasionally ground water) for filling, changes in precipitation and/or evaporation will have an impact on the length (hydroperiod) and the frequency of inundations. 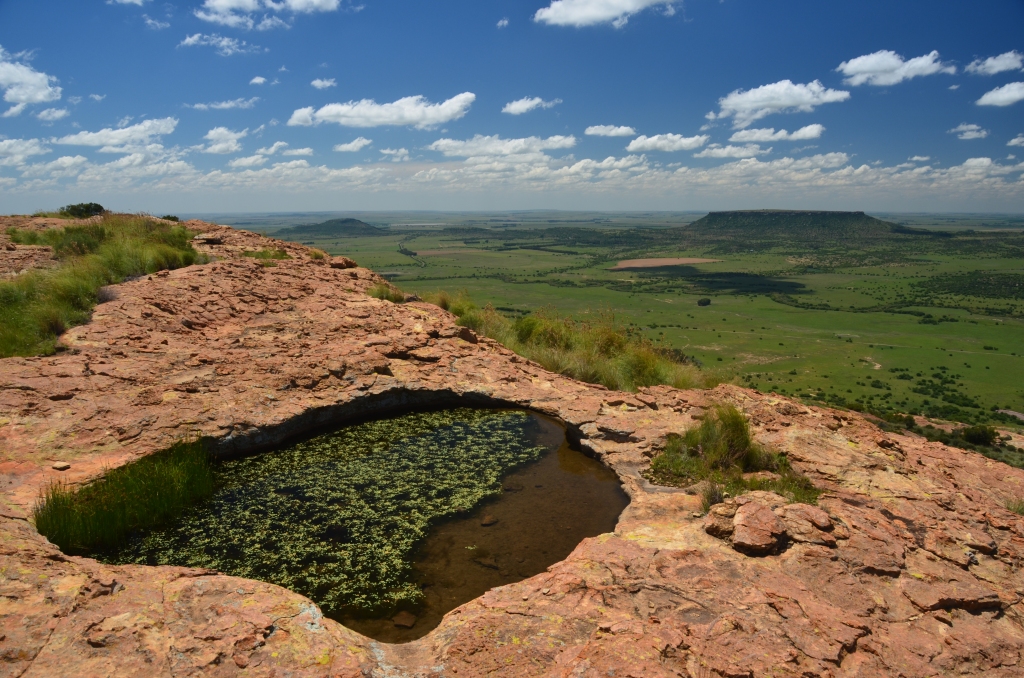 The model that was developed is a realistic simulation model which can be parametrized for individual pools and which can predict the water levels on a day to day basis based on nothing but pool morphometry and precipitation and evaporation data. By making use of historic climate it is possible to reconstruct the inundation history of a pool and, hence, reconstruct the long term disturbance regime which is relevant to explain both patterns of diversity as well as adaptive trait variation among populations.

However, the main advantage explored in this paper is the ability to simulate the effects of different IPCC climate change scenarios on inundation patterns. Karen did not only show that inundations are likely to be become shorter resulting in shorter growing seasons for aquatic fauna, she also modeled connections that are formed between pools during heavy rains. Under future scenarios that include less precipitation and higher evaporation, these connections formed less frequently. Overall, this shows that climate change can not only affect habitat suitability but also connectivity in clusters of aquatic habitats. This is relevant since different levels of connectivity can have pronounced effects, not only on the persistence of populations but also on diversity and the functioning of metacommunities.

The code of the model is optimized for the R programming environment and is readily available in the appendix of the paper. At the moment, the model is optimized to work in very simple aquatic habitats such as rock pools which have no groundwater influence and don’t leak water. However, Karen is currently extending the model to make it applicable for more complex temporary aquatic habitats such as temporary wetlands. 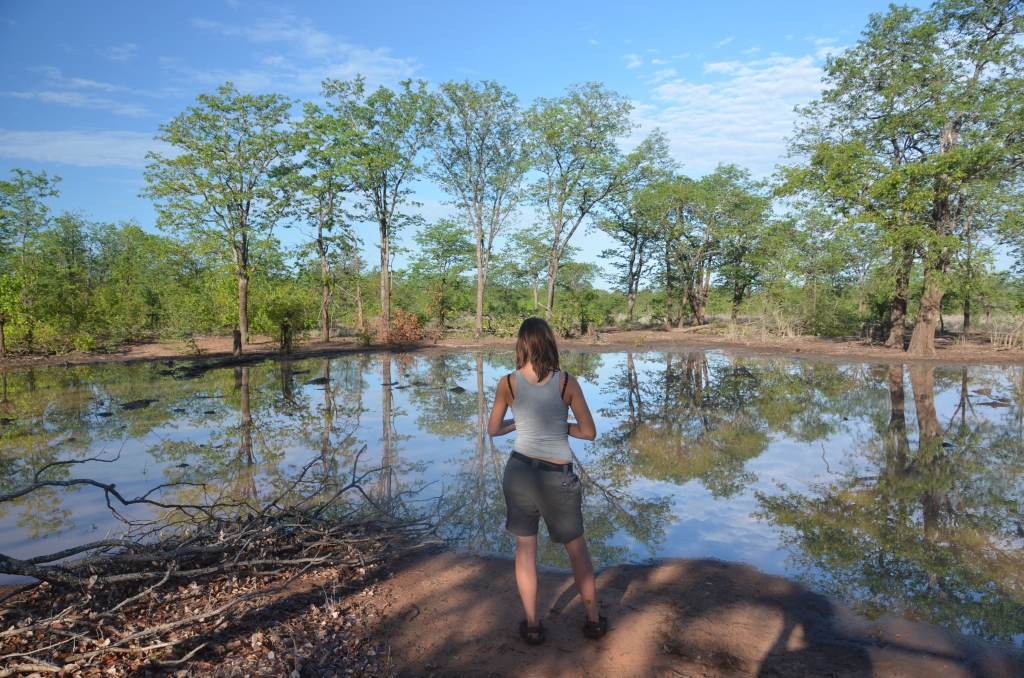 In a collaboration with the department of archeology at KU Leuven (Ralf Vandam and Eva Kaptijn) we used an ecological perspective and a statistical framework developed in community ecology, to investigate the drivers of human settlement patterns in a valley in Turkey over a time period of 8000 years. Not unsurprisingly typical ecological concepts such as sorting along environmental gradients, spatial autocorrelation and dispersal limitation can also be detected in the structure of early human settlements. It was cool to see that what started out as a fun discussion among friends in a bar (one biologist, one archeologist) now resulted in a proper paper. It was a difficult choice where to submit. Archeology journals have notoriously low impact factors and take a VERY long time to process reviews. On the other hand most ecological journals would not take this type of data. In the end we opted for the open access provided by PlosOne and hope the paper will find an audience. At the time I also conveniently had some remaining bench fee left to spend on publication costs.

In any case, I had a lot of fun playing around with distributions of a species that (often) makes rational decisions and we might try more interdisciplinary stuff in the future. 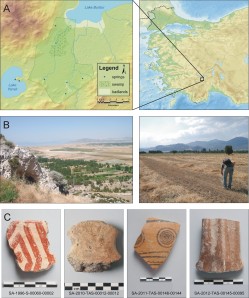 The study area: the Burdur plain in central Anatolia with examples of different human artifacts corresponding to different time periods. 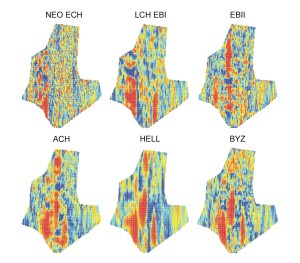 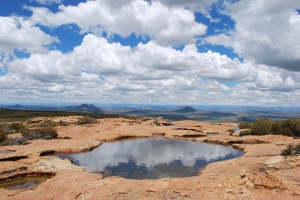 In this new paper in this month’s issue of “Ecology” we show how interactions between long term disturbance regime and patch isolation determine diversity patterns in rock pool metacommunities. It’s the final paper that integrates the different processes I studied in the Korannaberg rock pool cluster in South Africa during my PhD. It combines information from dispersal measurements and reconstructions of the hydrological disturbance regime of each of the pools and uses this information to investigate how variation in dispersal influx and disturbance regime affect diversity patterns and patterns of community structure. We found support for the predicted hump shaped relationship between dispersal rates and local species richness, but only in habitats with an intense disturbance regime. Disturbance reduced local diversity, but only when dispersal rates were low (in isolated patches) indicative of a negative synergy. In turn, local richness also decreased in well connected patches, possibly due to a higher abundance of generalist – and disturbance tolerant – predators in these patches.

The paper can be accessed via the journal’s website