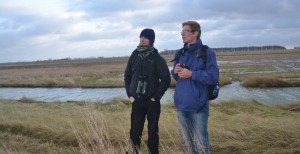 After just three years, Falko Buschke‘s Erasmus Mundus PhD fellowship came to an end. Just months later he succesfully defended his PhD thesis. Initially drawn to Belgium with the prospect of doing a thesis on community dynamics with a lot of empirical work, Falko soon settled into a different niche. Making use of the IUCN database he set out to explain the distribution patterns of terrestrial vertebrates in Africa. For this he used a very diverse set of statistical tools. He reconstructed biogeographical patterns in Africa based on how species present in different locations respond to spatial and environmental gradients. He experimented with novel ways to define regional species pools and investigated the drivers of patterns of alpha and beta diversity. Finally, he also experimented with spreading dye models and built a neutral metacommunity model to explain different biogeographical patterns in this  realm. Overall, it was an exciting journey exploring the interface between community ecology and macro ecology.  Falko, it was great having you here.  We will miss your wit and humour now you have returned to South Africa… and will continue to follow your adventures on  http://solitaryecology.com/

Just two weeks later, Tom Pinceel joined Falko in the league of doctors. After doing a MSc working on genetic patterns in rock pool fairy shrimp, Tom continued along this path and started to explore the hatching strategies of these enigmatic inhabitants of temporary pools worldwide. Tom showed adaptive variation in hatching strategies of pool invertebrates along a gradient of habitat stability. He also revealed that the ancient diversification of fairy shrimp on the Australian continent coincided with a period of intense aridification. When Australia lost most of its rainforests, desert adapted fauna like fairy shrimps seem to have benefited and responded with a spectacular adaptive radiation. This resulted in a nice little booklet with most of his chapters already published. Tom is now continuing his research into delayed hatching as a survival strategy in extreme environments as a prospective post doc. We can only hope he will be able to continue his work in the near future.